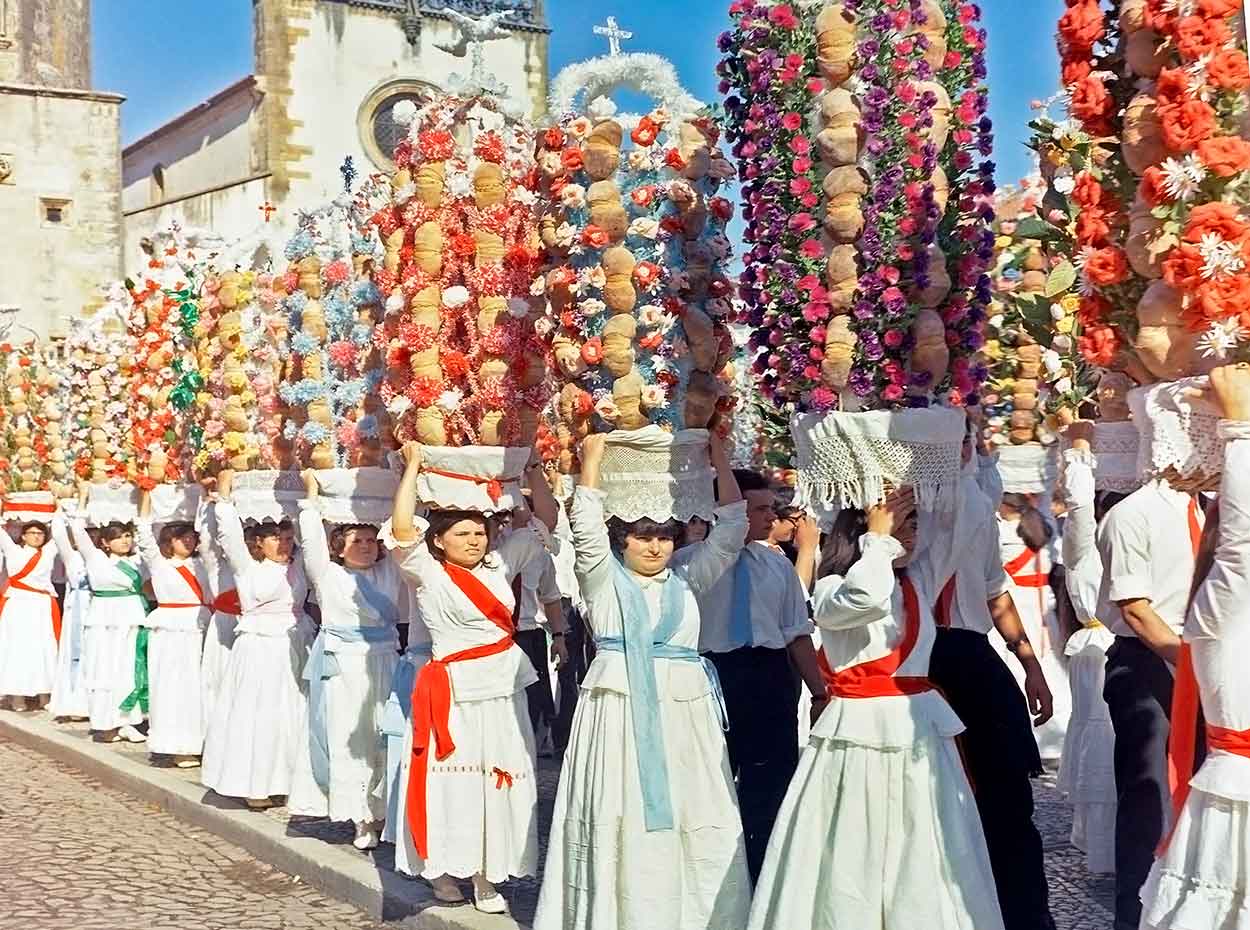 An old ritual of pre-Roman origin, and with its roots firmly set in an ancient fertility festival dedicated to the goddess Ceres, the Festa dos Tabuleiros is one of the most colourful and traditional events in Portugal’s cultural calendar.

This very rare spectacle takes place once every four years in Tomar, a historic town conveniently  located deep in the heart of central Portugal. The Order of the Templars was founded here in 1119 and its star attraction, the Convent of Christ, was built over a period of six hundred years.

Other must-see sights in Tomar include the late-15th century Gothic church of São João Baptista on the town’s main square (don’t miss the magnificent Last Supper painted by Gregório Lopes in the early 16th century) and a small Jewish museum housed in a 15th-century synagogue.

The Tabuleiros Festival was co-opted in the 14th century by the Brotherhood of the Holy Spirit – the latter founded by Queen Isabel as a means of gathering donations for the poor (Queen Isabel was later canonised as Saint Elizabeth of Portugal).

The event’s key moment is without doubt the Tabuleiros Parade in which young women dressed in pure white parade around the streets carrying on their heads tabuleiros (platters) of bread that are often as tall as they are. Their headdresses are bread loaves fixed by a bamboo frame decorated in red, yellow and purple paper flowers.

These tabuleiros consist of some thirty loaves of bread in all threaded onto rods attached to wicker baskets decorated with paper flowers, leaves and stalks of wheat, occasionally topped by a dove. The bounty was symbolically offered to the Holy Spirit as represented by the dove, the symbol of universal fraternity espoused by the Brotherhood.

Behind the girls and their escorts, priests carry silver crowns on black cushions followed by a marching band and a herd of bullocks with gilded horns and coloured wreaths. The parade also features horse and chariot cavalcades proudly parading along Tomar’s streets gaily paved with flower tapestries on religious and medieval motifs.

The Festa dos Tabuleiros, which literally translates as the Feast of the Trays, is one of southern Europe’s most lavish harvest festivals and a true cultural showpiece deep in the heart of Portugal’s hinterland.

The next one is due to take place in July 2023 (global pandemics permitting), but if you’re planning to visit you must book early because rooms are very scarce throughout the entire duration of the festival.

And once the Tabuleiros festivities are over, you’ll want to explore the region and discover some of the other principal towns and villages, such as the pretty whitewashed town of Constância 20 km south-east of Tomar which marks the point where the Tagus and Zêzere rivers meet.

Also worth seeing is the Castle of Almourel situated on an island in the Tagus, a short drive east of Constância. This fairy-tale fortress of Disney-like proportions was built on the foundations of a primitive Lusitanian castro and is one of Portugal’s most strikingly scenic fortresses.