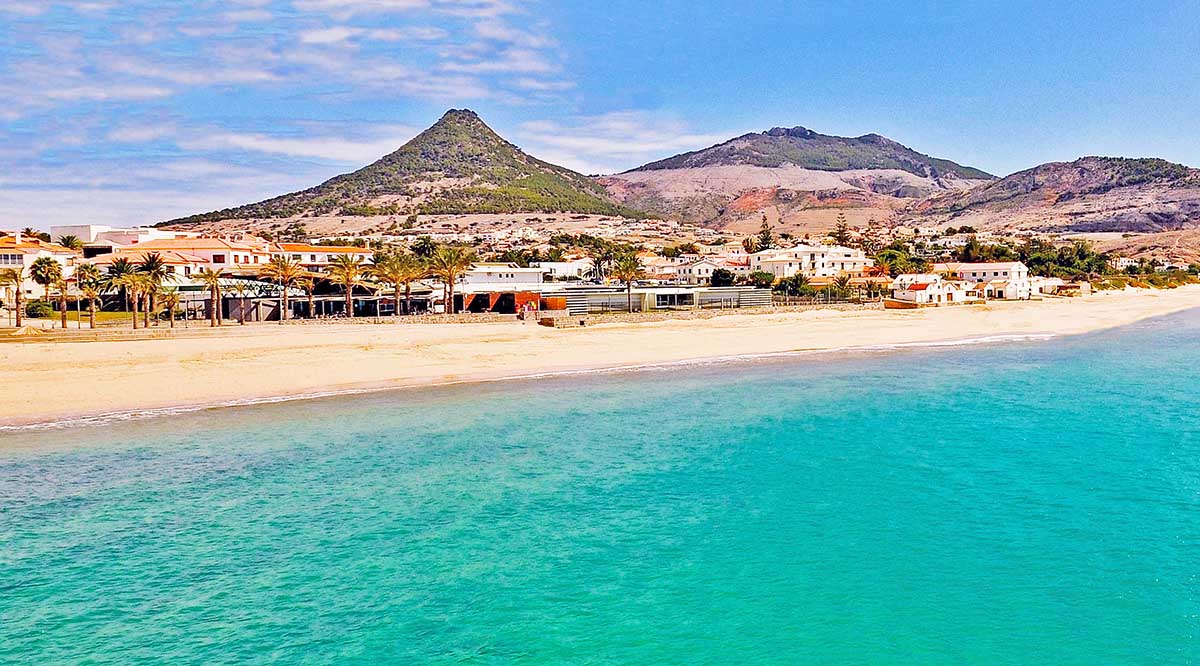 Vila Baleira is the capital of Porto Santo Island

One of the most idyllically-situated towns in the whole of Portugal is Vila Baleira, an ocean-side paradise and capital of Porto Santo Island in the Atlantic archipelago of Madeira.

Sitting midway along the island’s southern coast, this charming little town of just 5,000 souls has a very temperate year-round climate and, most notably, a long, golden sandy beach.

With its calm, crystalline waters, Vila Baleira promises its visitors a laid-back holiday atmosphere and a safe family environment with plenty of peace and quiet, as well as some of the most dazzling land and seascapes in the Atlantic region.

Discovered in 1418 by Portuguese explorers João Gonçalves Zarco and Tristão Vaz Teixeira, the town soon prospered under the island’s first governor, Bartolomeu Perestrelo, who went about developing the island of Porto Santo under the command of Prince Henry the Navigator, the driving force behind Portugal’s Age of Discovery.

Whilst living on Porto Santo, Perestelo authorised the marriage of his daughter, Filipa Moniz, to the great explorer Christopher Colombus and the couple’s house still stands in the centre of Vila Baleira.

It was in that very house that Columbus saw the birth of his son Diego and pored over the same maritime charts that would eventually assist in the planning of his subsequent and very successful sea voyage to America.

The house is now an excellent museum and the most popular tourist attraction on Porto Santo. The collection includes many items of considerable interest to visitors, such as original maritime charts, old navigational instruments, rare portraits of Columbus, superb models of his vessels and several objects collected from the wreck of the Slotter Hooge, a Dutch East Indiaman that went down off Porto Santo in 1724.

Located in the heart of Vila Baleira’s main square, the Largo do Pelourinho, the town hall is one of Porto Santo’s oldest and most impressive buildings, having been built in the 16th century when Portugal was at the height of its ground-breaking exploits.

Located in the upper part of town, São José Fort was constructed in the mid-17th century during the reign of King José I and is another relic from Porto Santo’s earliest days of habitation. The building is equipped with small iron cannons that helped defend the island from the perils and dangers of attacking pirates in days gone by.

Vila Baleira’s impressive parish church – the Igreja de Nossa Senhora da Piedade (Our Lady of Mercy) – is one of the town’s most important sights. Located in the centre, it was repeatedly attacked over the centuries and was even set on fire. Today it is well worth visiting for its magnificent altars and paintings by the renowned 17th-century artist, Martim Conrado.

Located in Campo de Baixo to the south-west of Vila Baleira, the exquisite chapel of Espírito Santo is another lovely old religious building from the 17th century with an interesting Roman-stye interior featuring intricate grey stone craftsmanship.

A short drive south-west of Vila Baleira brings you to one of the island’s most striking natural wonders, the world-famous Organ Pipes of Ana Ferreira Peak, an area of stunning natural beauty and extremely rare magmatic rock formations.

Porto Santo’s first windmill was built in 1794 and they subsequently spread all over the island due to its low relief, with sufficient wind blowing throughout the year to sustain the local inhabitants. Nowadays, many of them have been lovingly restored and windmills are now one of the island’s most iconic images.

North-east of Vila Baleira in the Serra de Fora district lies the Casa da Serra, a traditional homestead with an integrated period museum where visitors can see how past islanders lived before trying and buying some excellent local produce such as home-made cakes, biscuits, liqueurs, etc.

Another interesting museum north of Vila Baleia is the Museu Cardina which portrays the activities of the agricultural industry and other local trades with a wide array of objects and implements.

The Best of Belém